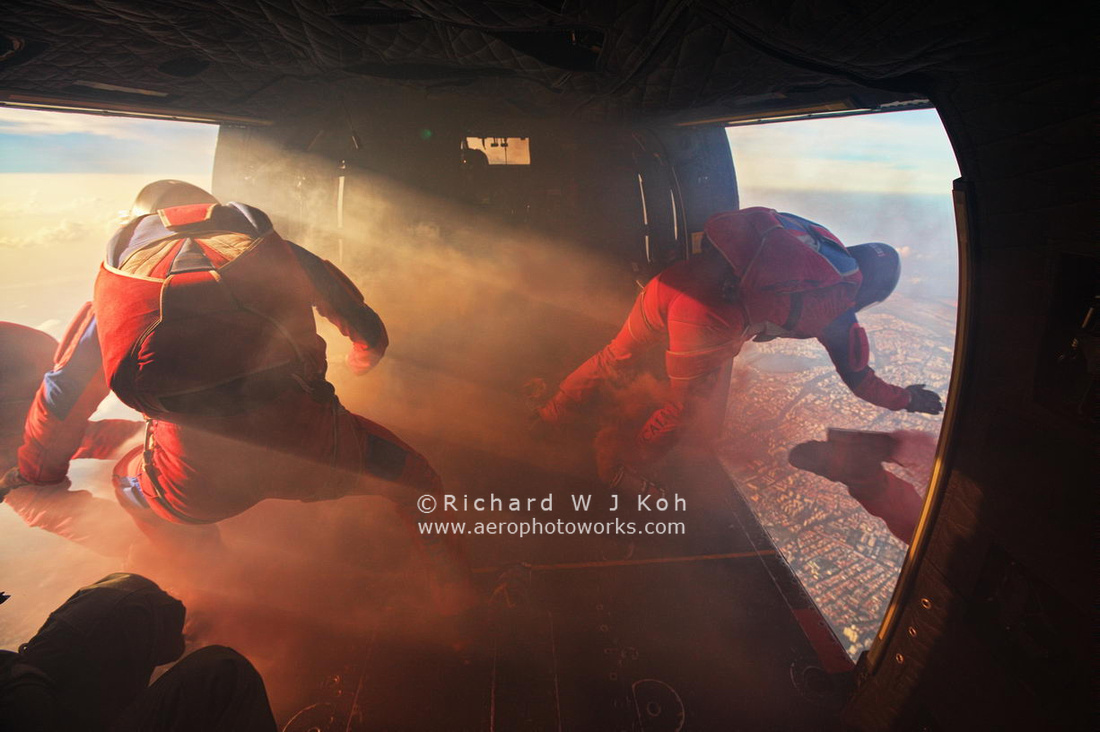 Red Lions parachutists jump off a military helicopter for a National Day Parade aerial display rehearsal with smoke released from canisters strapped to their legs. The sunlight streams in at just the right angle and timing. A leap of faith.

"Beware of missionitis!" reminded the helicopter pilot in charge to all the air crew and aerial display parachutists at a safety briefing, before a flight for a National Day aerial display rehearsal.

As part of the series of aerial photography flights for the book, Over Singapore, I was fortunate to fly with the Republic of Singapore Air Force (RSAF) on three helicopter flights in the year 2014. Two of which were with the aerial display parachutists known as the Red Lions  on board a Super Puma and one was on board a Chinook towing a giant state flag. This meant that I also had to attend three safety briefings, each one mandatory before a flight to all going on board. Missionitis was repeated at every briefing.

Missionitis was especially emphasized to the Red Lions. On the first rehearsal flight with them, at 10000 feet above sea level, they were all geared up and ready to jump. Moments before, during the ascent, I saw them close their eyes in deep thought going through the jump routine in their minds, with their arms rehearsing the moves-when to tuck in, when to pull the cord... The team leader, leaning out of the door to check the air visibility, had to make the final call to proceed. The window of opportunity was a breath-stopping few minutes... Alas, it was a no-go! Low lying clouds had obstructed the view of the parade ground which they had to land on and they could not wait for it to clear due to the parade programme. I suppose in no duff missions, they would have jumped (each of them was a veteran special forces commando), but for safety, parachuting onto a floating platform surrounded by skyscrapers, which they could not see from the heli, would not have been worth the risk.

So, we had to go again the following week. For them, it was a missed opportunity. For me it was a bonus flight. It turned out providential as the sunlight streaming into the smokey heli at just the right angle and timing in the final shot was sacred.

"Missionitis" is an aviation industry term used to describe situations where pilots or people in an aerial operation place more emphasis on mission accomplishment while compromising safety. It could very well apply to any of us in any situation.